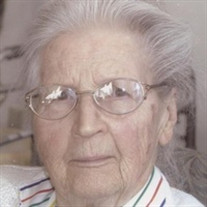 Wilma Lydia (Auntie) Pieren was born on the Pieren farm in Helvetia on May 2, 1914. She passed away on September 20th, 2013. She was the second child of Swiss emigrant parents Conrad Pieren and Bertha (Meyer) Pieren. Wilma was raised in Helvetia attending Helvetia school and later, the Girls Polytechnic School in Portland. After finishing school, she started her life long career as a nanny/housekeeper for the Swigert family in Portland. She remained a part of the Swigert family for over 50 years until retirement, tending to several generations. Upon retiring, Auntie resided in Hillsboro before moving to Cornell Estates. Her last days were spent with Mihaela and staff at Four Seasons Adult Care in Aloha. The family would like to extend a heartfelt thanks to Mihaela and staff for all their love and care for Auntie. When two servants of God walked into the Helvetia community in the winter of 1929 to have gospel meetings, Auntie accepted Christ and was true to her calling to the end of her life. Auntie will always be remembered for her quiet and generous nature, and putting everyone's needs before her own. She loved to walk everywhere and all her nieces and nephews have fond memories of walking with Auntie. Although Auntie never married, she had more "Children" than anyone. She was fondly "Auntie" to everyone whether it was family or friends. She will be missed by family and her many friends. In addition, Auntie loved to play bingo, quilt, knit, and she especially loved her birthday parties. Auntie was preceded in death by her parents, Conrad and Bertha Pieren, her brothers, Ted and Clarence Pieren, and her niece Janice Lewis. She is survived by her brother Don Pieren of Grants Pass, sister Pearl Johnson of Sherwood, and sister-in-law, Wilma Frances Pieren of Helvetia. She is also survived by six nieces: Donna Mae Bullick, Rayetta Sperl, Janet Davidson, Sheryl Hoodenpyle, Katherine Crawford, and Ronda Tolley. Four nephews include: Gary Johnson, Wayne Pieren, Curtis Pieren, and Kenneth Pieren. There are eleven great nieces, ten great nephews, eight great-great nieces, and seven great-great nephews. Some people give of themselves and never know the depth of what they have given. She will be remember for her smile, and giving spirit. We love you Auntie, you will always be in our hearts. Thank you for the wonderful memories.

Wilma Lydia (Auntie) Pieren was born on the Pieren farm in Helvetia on May 2, 1914. She passed away on September 20th, 2013. She was the second child of Swiss emigrant parents Conrad Pieren and Bertha (Meyer) Pieren. Wilma was raised in Helvetia... View Obituary & Service Information

The family of Wilma Lydia (Auntie) Pieren created this Life Tributes page to make it easy to share your memories.

Wilma Lydia (Auntie) Pieren was born on the Pieren farm in Helvetia...