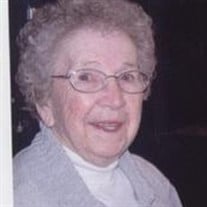 Virginia Carole Baughman, 91, a resident of the Forest Grove community and previously of Hillsboro, died Sunday, April 28, 2012 at her home of natural causes. Viewing and visitation will be held Wednesday, May 2, 2012 from 10am to 1pm at Donelson~Fir Lawn Memorial Center, 1070 West Main St. Hillsboro, Oregon. Funeral Services will be held Wednesday, May 2, 2012 at 1pm at the Memorial Center Chapel with Pastor Daryl Roberts officiating. Interment will follow at Fir Lawn Memorial Park. Virginia Carole Baughman was born December 21, 1920 in Portland, Oregon to Glen and Letha Blodgett Robson. She was raised and educated in the Orenco area, having graduated from high school in 1938. Virginia was united in marriage to Harlan Baughman on August 17, 1940 in Vancouver, Washington. They celebrated sixty-three years of life together and raised three sons before he preceded her in death in January of 2004. She kept the family together while Harlan served our country in the US Navy during WWII. She was a busy wife, mother and homemaker. Virginia worked at the Birds Eye Cannery during the harvest seasons. The family attended the Evergreen Christian Center for many years. Among her personal interests she loved to do oil paintings. She gave many of them to her family as gifts over the years, they included landscapes and florals. Her favorites were always the roses. Virginia loved to travel, visiting Europe, Canada, Austrailia and New Zealand. She went on several cruises including to Alaska and Hawaii. She enjoyed spending time with her cats. As she began collecting grandchildren and great grandchildren she loved being "the Grama". Her face would always light up when they came into see her. She was preceded in death by two sons; Steve Baughman in 1962 and most recently, Robert Baughman. Survivors include her son and daughter in law; Daniel and Sue Baughman of Boise, Idaho, sister, Lois Meigs of Hillsboro, Oregon, six grandchildren; Jamie, TaLanda, Aaron, Damon, Samantha, and Kathleen. Also surviving are thirteen great grandchildren and one great great grandchild as well as several nieces and nephews. The family suggests that remembrances may be contributions made to the American Cancer Society, in her memory. Please check back for photos and personal tributes.

Virginia Carole Baughman, 91, a resident of the Forest Grove community and previously of Hillsboro, died Sunday, April 28, 2012 at her home of natural causes. Viewing and visitation will be held Wednesday, May 2, 2012 from 10am to 1pm at Donelson~Fir... View Obituary & Service Information

The family of Virginia Carole Baughman created this Life Tributes page to make it easy to share your memories.

Virginia Carole Baughman, 91, a resident of the Forest Grove...

Send flowers to the Baughman family.