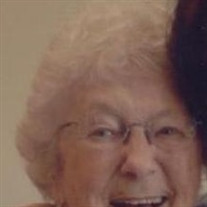 Theresa was born April 23, 1920, in Roy, to Rosaline and Peter Vandehey. "Terry," oldest of nine children, grew up in the Roy area. While working in the daffodil fields of Warren's Farm in Gales Creek, she met her lifelong partner, Elden McRobert. Elden and Terry were married May 24, 1940, at St. Anthony's Catholic Church in Forest Grove. A few months after their first child, (Myrna), died in childbirth, Elden was shipped overseas to the front lines of WWII. After his safe return four years later, they raised four children on a 30 acre farm south of Hillsboro, where they grew filberts, strawberries and walnuts. Their love of the outdoors was reflected in the beautiful yard and garden they lovingly tended.Two words that best described Terry are love and faith. She was a prayer warrior that many went to, putting on her "prayer cap" and seemingly accessing a "direct line to God." While Terry raised her family, worked on the farm and spiritually interceded for others, she was also a devoted parishioner of St Matthew Catholic Church, volunteering in many capacities. She was known for her apple pies, dill pickles and chocolate-coated filberts. Like her heart, her home had no boundaries. She cherished being surrounded by family, cheerfully hosted countless birthday celebrations and holiday events and loved vacationing in Reno, Nev., and Hawaii with Elden. Terry's last years were spent with her husband at Cornell Estates in Hillsboro, where she treasured special connections with several caregivers, residents and hospice members and was crowned Senior Rose Festival princess in 2010. Elden and Terry were just one week short of celebrating 74 years of marriage. Terry is survived by her beloved husband, Elden; son, Ray; daughters, Aletha Harlow, Dorene Simpson and Linda Fairham; nine grandchildren; and 10 great-grand- children; brother, Eldon Vandehey; and sister, Darlene Woods. She will be missed more than words can say. In lieu of flowers, donations may be made to Serenity Hospice at (503) 639 -0600.

Theresa was born April 23, 1920, in Roy, to Rosaline and Peter Vandehey. "Terry," oldest of nine children, grew up in the Roy area. While working in the daffodil fields of Warren's Farm in Gales Creek, she met her lifelong partner, Elden McRobert.... View Obituary & Service Information

The family of Theresa McRobert created this Life Tributes page to make it easy to share your memories.

Send flowers to the McRobert family.