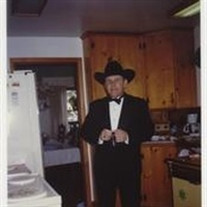 Sid Karlen, 70, died Monday, February 7 th , 2011 at his home in Hillsboro, Oregon following a brief battle against cancer. He leaves behind his wife of 51 years, Ann Karlen: daughter Tira Van Loo of Hillsboro, her children Dean Campbell and Danae Dorn; daughter Tammy Thompson and her husband Ben Thompson of Sweden, their children Sidney and Ashley; daughter Tabetha Betty and her husband Lee Betty of Colorado, their children Garrett and Heath; and two great-grandchildren Keona and Castle Dorn as well as many cousins, nieces and close friends. Sid was born in Hecla, South Dakota and later moved to Aberdeen. After graduating from Central High in Aberdeen, Sid volunteered for the draft and served two years in the Army. While stationed in Seattle, he met his wife and life-long best friend Ann, who was also in the Army. After separation from the service, Sid and Ann moved to Aberdeen, where he worked at Hub City Iron. In 1964, Sid, Ann and their two children moved to Oregon where Sid worked for Loy Clark Pipe Line for more than 40 years. He was a retired member of the Operating Engineers Local 701. He operated heavy equipment and loved working with NW Natural Gas and PGE on the pipeline. Sid was happiest when he was with his family. He spent many hours at Tammy and Ben's farm working with his horses and anything that needed done. Sid had a passion for working on clocks and watches. He loved to search garage sales for hidden treasures and great deals to add to his many collections. Sid was blessed with many amazing friends and he enjoyed helping them with any project from bee keeping to swap meets. He also enjoyed riding his bike to town, where he enjoyed breakfast with the pharmacy gang. Sid spent many hours helping out at Emanuel Lutheran Church where he developed close relationships with many members. Sid was known for his work ethic, sense of humor and his unfailing faith in God. A funeral service will be held Saturday, February 12 th at 11:00am at Emanuel Lutheran Church in Cornelius, Oregon. Memorials can be made to Emanuel Lutheran Church, where Sid and Ann have been active members for years, or to Washington County Hospice.

The family of Sid Karlen created this Life Tributes page to make it easy to share your memories.

Send flowers to the Karlen family.