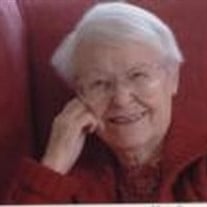 Ruth Chapman Porter, 94, died Wednesday, January 12, 2011 at her home in Beaverton. Ruth was born December 23, 1916 in Portland, Oregon, to Robert Edwin and Grace Morrill Chapman. She was preceded in death by her young son, Edward "Buster" Porter, her husband, Frank, and all four of her siblings, Lawrence Chapman, Elizabeth Amos, Eleanor Wiley and Robert Chapman. She is survived by her son and daughter-in-law, Bob and Pat Porter, of Beaverton, OR, her daughter, Peggy Porter of Kelso, WA, her granddaughter and husband, Barbara Porter and Brandon Repperd, and great grandson, Jaice Porter-Repperd of Santa Cruz, CA. Ruth grew up in Portland and graduated from Franklin High School in 1935. Following graduation, she worked at the Waverly Baby Home and held other jobs in Portland until her marriage to Frank W. Porter on February 3, 1940. Together, they raised three children and celebrated 56 years together. Ruth was a busy and active mother who always managed to find time for extended family and community activities. Through notes, letters and phone calls, she kept track of all her family members and many friends. She was always willing to answer questions anyone had about family history. Ruth was an avid reader whose interests varied greatly. She loved "visiting" various places throughout the world via travelogues on television. "Field trips" to museums, children's theater, tide pools, and other interesting places and events were always on the calendar for her children and granddaughter. She also enjoyed a variety of arts and crafts and had a special interest in water color painting. A Celebration of Life Service will be held Tuesday, January 18, 2011 at Donelson~Fir Lawn Memorial Center, 1070 West Main Street, Hillsboro, Oregon, with Pastor Hanna Peterson of the First Presbyterian Church in Kelso, WA, officiating. Private Family visitation and Private Cremation Rites have been held. Family and Friends are invited to attend a reception immediately following the services at the Forest Hills Golf Course Clubhouse in Cornelius. Private Family Inurnment will be held at a later date at Mountain View Memorial Gardens in Forest Grove, Oregon. The family suggests that contributions in Ruth's memory be made to the charity of one's choice.

Ruth Chapman Porter, 94, died Wednesday, January 12, 2011 at her home in Beaverton. Ruth was born December 23, 1916 in Portland, Oregon, to Robert Edwin and Grace Morrill Chapman. She was preceded in death by her young son, Edward "Buster"... View Obituary & Service Information

The family of Ruth Porter created this Life Tributes page to make it easy to share your memories.

Send flowers to the Porter family.