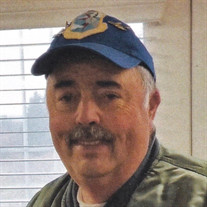 “A Man of Many Talents” Ronald Merriel Bacon was born in Portland, Oregon on April 16, 1941 to Merriel R. and Veyonne (Gary) Bacon, where he attended Woodstock Grade School and Franklin High School. At a young age Ron showed artistic talent by creating drawings of airplanes and cars during class to his teachers dismay. He enjoyed a lifelong hobby of building detailed models of cars, planes and trains. As an adult Ron constructed large radio control airplanes and designed his garden railroad engines and rail cars to be exact replicas. He also enjoyed spending time at the Oregon Rail Heritage Center restoring the S.Pacific #4449 steam engine. His love of cars was apparent to all who knew him. When Ron became old enough to drive, his first car was a 1941 Ford coupe, then a string of classics from the 40’s and 50’s that he would repair. A favorite was a white Chrysler 500 and his recent T-Bird. When Ron was 11 years old his father passed away and in many ways he became the “man of the house” and the “protector” of his little sister, Melinda. They formed a strong bond as they grew up together. Ron joined the U.S. Air Force where he trained to repair airplane instruments and radios. He served overseas in Okinawa, Japan among other locations. Upon leaving the service in 1964 Ron started working at Precision CastParts. Soon he moved to his career at Tektronix (later Merix Corp) for over 25 years as an electronic technician and troubleshooter. When he retired he filled some time as a school bus driver for Hillsboro School District. In 1966 he married Beverly Tomlin in Gresham, Oregon and together they had three children. They later divorced. In 1992 Ron married Merlene Rogowski of Hillsboro. They enjoyed many activities and travels together. Together they created a Garden Railway town in their yard. His great passion was becoming a private pilot and owning his own airplane, one of which was the “Silver Bullet.” He loved RV camping, cross country road trips, fishing, hunting including his prized bear hunting adventures in southern Oregon. Ron was always ready for an adventure and enjoyed belonging to many groups. He was a member of ToeDraggers Square Dance, Rose City Garden Railway, Sumpter Valley Railroad and Radio Control Model Airplane Clubs. Ron loved the Lord Jesus as a very active member of Laurel Community Church in Hillsboro and a prior member of First Baptist Church. Ron is survived by his cherished wife, Merlene R. Bacon, her 4 children and 11 grandchildren and 8 great grandchildren as well as his three children Steven Bacon (grandchildren Joseph, Dominic, Cassandra); David Bacon (Annette) (granddaughters Anastasia, Genevieve); and Catherine Hewgill (Michael) (granddaughter Elizabeth); and his sister, Melinda Dorning (James) and their children. A memorial will be held at Laurel Community Church on June 5th at 3pm followed by a ceremony at Willamette National Cemetery with military honors on Wednesday, June 9th at 2pm. Donelson Funeral Chapel is handling arrangements. Donations may be made in Ron’s name to the American Heart Association.

&#8220;A Man of Many Talents&#8221; Ronald Merriel Bacon was born in Portland, Oregon on April 16, 1941 to Merriel R. and Veyonne (Gary) Bacon, where he attended Woodstock Grade School and Franklin High School. At a young age Ron showed artistic... View Obituary & Service Information

The family of Ronald Merriel Bacon created this Life Tributes page to make it easy to share your memories.

“A Man of Many Talents”

Send flowers to the Bacon family.