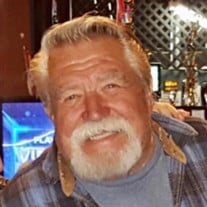 Bob Prohaska, 78, a longtime resident of Vernonia, passed away peacefully in his home in the company of his caring family on May 21st, 2021 due to complications of dementia. Bob was born April 29, 1943 in Portland, OR, the son of the late Frank Prohaska and Lorraine (Leckington) Prohaska. He was raised in Bonny Slope, and attended Beaverton, and graduated from Sunset High School. He was in the Air Force from 1962 – 1966 and was based out of Roswell, New Mexico. When he returned to Portland, he worked for Beaverton Sanitary Service. During this time, he worked the hay fields for the Weisenfluh family in the Cedar Mills area, also owning the Rock Creek Tavern working nights when it was still a country tavern. In 1971, Bob was united in marriage to Julie Congdon and shortly after had two daughters, Jenny Lee and Sarah Jane. Bob and Julie would have celebrated their 50th wedding anniversary this August. Residing in the Helvetia area for 5 years, Bob soon bought the Nehalem Valley Sanitary Service and moved his family to Vernonia in 1979. Owning and operating the garbage service in the community, he had a generous personality and was known for his acts of kindness and hard work. Everyone knew Bob! He sold the garbage business in 1998 but could be seen for a few years working for the post office delivering mail on rural routes. After retiring, he spent his time working on classic cars (‘57 T-Bird and 1950 Ford panel), welding yard art out of bed rails for Julie’s garden and flower beds on their 1903 farmhouse, and socializing with many buddies from the community. Bob also had a soft spot for animals, especially dogs which were always a part of his life. He was preceded in death by his parents Frank and Lorraine, and Julie’s parents Stan and Fern Congdon. Survivors include his wife Julie Prohaska, his children Jenny Lee Prohaska (George) and Sarah Jane Black (Dann) his three brothers Dick, Don, and Ray Prohaska, along with his sister's in-law Sue (Ernie), Marilyn (Bruce), and several cousins, nieces, and nephews. He will be remembered for fun times at his Superbowl and “dump” parties and for his unique brand of humor and crowd-pleasing float entries in many St. Patrick's Day and jamboree parades. His willingness to always lend a helping hand, singing along with his favorite country tunes, and love for laughter will be missed by all. A Celebration of Life will be held at a later date for close friends and family. In lieu of flowers, the family requests donations be sent to Community Hospice of Longview, WA. The family is grateful for the excellent hospice care provided for Bob.

Bob Prohaska, 78, a longtime resident of Vernonia, passed away peacefully in his home in the company of his caring family on May 21st, 2021 due to complications of dementia. Bob was born April 29, 1943 in Portland, OR, the son of the late Frank... View Obituary & Service Information

The family of Robert "Bob" F. Prohaska created this Life Tributes page to make it easy to share your memories.

Bob Prohaska, 78, a longtime resident of Vernonia, passed away...

Send flowers to the Prohaska family.