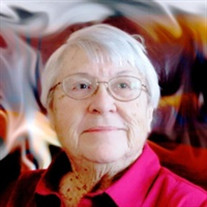 Peggy Jo Pryor was carried by angels to her precious Savior on Thursday, September 11, 2014. She was surrounded by her family, who were remembering her with pictures and stories. Peggy was born on a farm in Pauls Valley, OK in 1932. She moved with her parents to Monterey, CA in 1946. Peggy came know the Lord through the influence of her best friend Iva Ruis. It was in Monterey also that she met her husband, Marshall E. Pryor. He was a sailor and was stationed on bases throughout the US, eventually settling in Beaverton, OR in 1968, when Marshall E. was with Tektronix. She and Marshall were active in church, youth ministries and missions throughout her life. She was a homemaker, a seamstress, an excellent cook, an administrative assistant at Tektronix, and she had her own word processing business. She was active in the lives of her children and grandchildren. She was sought out for advice and guidance by others. She was smartnot much got by her, and there wasn't much she couldn't do. She and Marshall were a match made in heaven. Just after celebrating 50 years of marriage, Marshall was taken home to heaven in October of 2002. Peggy is survived by her four children: Marshall V. (Dorothy), Gaylene Barber (Randy), Brian (Diane) and Schellie, all of Portland, OR. She was devoted to her 9 grandchildren: Cristina Garrison (Mike), Stephanie Adams (Daniel) of Washington, Jessica, Joey, Josh, Andrew , Molly, Grayson and Morgan, her 3 great grandchildren: Cadie, Jaxon and Logan, and her sister, Elizabeth Kirkbride, who lives in Minnesota. She is also survived by her beloved granddog, Brutus. Peggy is also survived by so many brothers and sisters in Christ, whom she counseled, taught, loved and fed, and many other friends whose lives she has impacted. And she will long be remembered for her Snickerdoodle Cookies and her Apple Pies. A private graveside service (for family only) will be held on Saturday, September 20. A Celebration Of Life will be held at Village Baptist Church in Beaverton, OR, on Saturday, September 27, 2014 at 10:00 am. Remembrances to the Peggy Pryor Memorial with Africa New Life Ministries will honor Peggy's passion for sewing and for sharing the love of Christ in Rwanda. Online donations can be made by clicking this link: https://www.denarionline.com/DONORSERVICES/TEMPLATEPAGE.ASPX?COMP_REF=_AFNLM&CONTENT=SOLG_GIVINGOPTIONS_LIST&MASTER=MASTER_NOMENU (You will need to scroll down to find "Peggy Pryor Memorial".)Donations can also be made by mailing a check to ANLM, 7145 SW Varns St. #201, Portland, OR 97223. Checks should be made out to ANLM, with PEGGY PRYOR MEMORIAL on the note line. .

Peggy Jo Pryor was carried by angels to her precious Savior on Thursday, September 11, 2014. She was surrounded by her family, who were remembering her with pictures and stories. Peggy was born on a farm in Pauls Valley, OK in 1932. She moved... View Obituary & Service Information

The family of Peggy Jo Pryor created this Life Tributes page to make it easy to share your memories.

Peggy Jo Pryor was carried by angels to her precious Savior on...

Send flowers to the Pryor family.