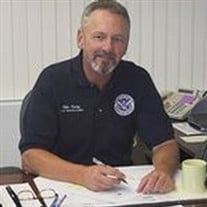 MICHAEL THOMAS CONLEY December 13, 1946 - October 12, 2010 Mike died suddenly on October 12, 2010, while on a golfing vacation in Japan. He was born December 13, 1946, at Twisp, Washington to Bill and Elsie Conley. He graduated from Montesano, WA High School in 1965. Mike attended Grays Harbor Community College, joining the Navy in 1968. He spent most of his Navy career aboard the Guided Missile Destroyer USS John Paul Jones. Mike was hired as a deputy sheriff on November 1, 1973 for Washington County. He worked his way through the ranks serving as Senior Deputy, Lieutenant, Captain, and eventually Chief Deputy, second in command of the Washington County Sheriff's Office. While working as a deputy, he received his degree at Portland State. Mike was one of the original members of Washington County's Tactical Negotiations Team, serving from 1976 to 1979. He served as the team commander after being promoted to Lieutenant in 1979. Mike graduated from the FBI National Academy in 1986. He held leadership positions serving as Captain of Investigations, the Jail Services and Patrol. He was promoted to Chief Deputy in June of 1993. Mike retired in February 1999. He joined the Transportation Security Administration on October 2002, as the Assistant Federal Security Director for Screening in SE Idaho and Western Wyoming. In March 2005, he was appointed Federal Security Director for the airports in SE Washington State. In the fall of 2006 he accepted the position as the Federal Security Director for Saipan International Airport and the Commonwealth of the Northern Mariana Islands, where he was currently employed. Mike loved his job, was an avid reader, but his passion in life was GOLF. Mike was preceded in death by his parents. He is survived by his wife Linda; son, William (Heidi) Conley and grandchildren Ian and Gracie of Malott, WA.; stepsons, Travis Nutt, San Diego, CA, and Tye (Carolyn) Dawson and grandchildren Conley and Claire of San Diego, CA; sister, Barbara Conley of Hillsboro, OR; nieces, Sarah (Paul) Lood and Laurie (Steve) Lesnard of Portland, OR. A memorial service will be held at Cedar Mill Bible Church, 12208 NW Cornell Road, Portland, OR 97229, on November 6, 2010 at 10 AM. For those who wish, donations may be made to the American Heart Association.

The family of Micheal Thomas Conley created this Life Tributes page to make it easy to share your memories.

Send flowers to the Conley family.