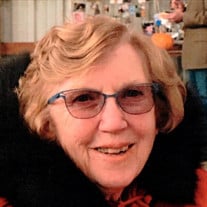 “A Country Girl at Heart” Merlene Helen Harding was born in Salem, Oregon on June 10, 1936 to Merlin and Helen Harding. She grew up on her Grandpa Archie and Grandma Ida’s farm in Pratum, Oregon. She enjoyed living in the country and working with the farm animals. One of her favorite stories to tell was how she carried the milk to the end of the driveway for the milkman to pick up. She moved to Hillsboro, Oregon in her sophomore year of high school and attended Hillsboro High School. Merlene played many sports in high school and went by the nickname of “Mert” on her basketball team. Set up by friends, Merlene met Donald Rogowski on a blind date and they were married on September 1, 1956. Merlene and Don had 4 children, 3 daughters and a son. The family moved to the farm in Laurel in the summer of 1972 where Merlene was able to embrace her country roots again. They raised many farm animals including beef cattle, a milk cow, geese and chickens. She kept busy by raising her family, sewing, canning, tending to a large garden, and helping Don with the chores around the farm. Some of the activities that Merlene and Don enjoyed together were square dancing with the Toe Draggers square dance club, playing cards, camping and road trips with their friends and neighbors. Once the children were grown, Merlene began working at Intel in Aloha, Oregon. In 1989, Merlene lost Don to a tractor accident. In 1992, Merlene married Ronald Bacon of Portland, Oregon. They enjoyed square dancing, flying in Ron’s plane and working on their garden railroad. Merlene’s main contribution to the garden railroad was the landscaping, here she was able use her knowledge and love of gardening. Merlene’s favorite hobby, and her true passion, was quilting. She had an artistic side that she used when creating a quilt design and she loved sewing quilts for all of her family. Pacific City was one of Merlene’s favorite locations, she had a house built there and spent a lot of time walking on the beach and climbing the giant sand hill. Merlene had a very strong faith and love for Jesus, her and Ron were members of Laurel Community Church and regularly attended church services together. Merlene was widowed a second time when she recently lost Ron to heart surgery complications. Merlene is survived by her four children Carolyn Johnson (grandchildren Greg, Geoff, Casidy and Dannica, great granddaughters Halayna and Claire); Janice Taylor (Steve)(grandchildren Russell, Victoria and Olivia, great granddaughters Everley and Georgia); Rick Rogowski (Trina)(grandsons Michael and Ricky, great grandchildren Chase, Paige and Adira); and Melinda Saccareccia (Scott)(grandchildren Nick and Hayley, great granddaughter Karsen) as well as Ron’s 3 children and 6 grandchildren. A memorial will be held at Laurel Community Church on June 19th at 2pm. Donelson Funeral Chapel is handling arrangements. Donations may be made in Merlene’s name to Kindred Hospice.

&#8220;A Country Girl at Heart&#8221; Merlene Helen Harding was born in Salem, Oregon on June 10, 1936 to Merlin and Helen Harding. She grew up on her Grandpa Archie and Grandma Ida&#8217;s farm in Pratum, Oregon. She enjoyed living in the... View Obituary & Service Information

The family of Merlene Helen Rogowski-Bacon created this Life Tributes page to make it easy to share your memories.

“A Country Girl at Heart” Merlene Helen Harding was born in Salem,...

Send flowers to the Rogowski-Bacon family.