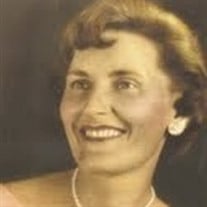 Margie Mary Pierson, 88, entered the glory of heaven on Jan. 9, 2014. She was born December 30, 1925, to Francis and Clara Hoefer in Petersberg, Nebraska. She was the eldest of 8 and moved with her family to Oregon in 1940. When the war started she went to work in a box factory in St. Johns, where she met and married Jim Palmer. He was drafted into the service and then was based in Fort Benning, Georgia. After their first child was born, they moved back to Oregon where they had 2 more children. After their divorce Margie met and married Carl "Andy" Pierson on March 8, 1957. Andy was her rock and true love. He adopted her children to be his very own. Together, they had 3 more children and before his death celebrated 50 years of joyful marriage. Margie quit school when she was a sophomore in high school, feeling it was her obligation to help with the family. However she never gave up her dream of graduating. In 1982 she received her GED at the age of 56, making her family very proud, the same year her youngest daughter graduated from High School. She loved her siblings and spent much time visiting with them over coffee, cookies, or a game of cards, but her heart's passion was her children, grandchildren and great grandchildren. She was "Mom of Moms." Her family adored her and "Her children rise up and call her blessedGive her the reward she has earned; she should be praised in public for what she has done." She was truly the epitome of the Proverbs 31 woman. She was a member of the Oregon Flying Farmers with Andy, and spent many years with him flying in their small airplane around the country with life-long friends. She was never very comfortable flying, however, she overcame her fear and eventually took flying lessons and obtained her "Land-It" certificate showing she could land the plane in an emergency. When Andy gave up flying and traded the airplane for an RV she was thrilled beyond words. She loved traveling with the friends they once flew with, but mostly she loved family and the Lord. She was a long time member of Mt. Olive Lutheran Church in Forest Grove. Everyone who met her was touched by the Spirit of the Lord through her beautiful smile and sweet disposition. Her loving presence will be missed by all her family and all who knew her. She had confidence that God had prepared a mansion for her where she would join her husband Andy, son David and brother Bud. She was survived by her children: Ellie and Ralph Sutter, Jim and Linda Pierson, Rita Pierson (spouse of her deceased son David), Andrew and Diane Pierson, Ken and Sue Pierson, Angie and Brian Cornell. She had 19 grandchildren, 15 great grandchildren and numerous cousins nieces and nephews, also surviving her are siblings; Germaine Davis, Joanne Walters, Carolyn Keller, Dorothy Sitka, Fran Hoefer, and Janice Romo all of whom will miss her dearly. The family suggests in lieu of flowers donations be made to Willamette Valley Hospice, or Mt. Olive Lutheran Church.

Margie Mary Pierson, 88, entered the glory of heaven on Jan. 9, 2014. She was born December 30, 1925, to Francis and Clara Hoefer in Petersberg, Nebraska. She was the eldest of 8 and moved with her family to Oregon in 1940. When the war started... View Obituary & Service Information

The family of Margie Pierson created this Life Tributes page to make it easy to share your memories.

Margie Mary Pierson, 88, entered the glory of heaven on Jan....

Send flowers to the Pierson family.