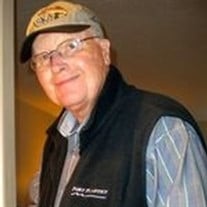 Larry Aldrich A life well lived Larry was born Feb 14th, 1938 in Longview, Washington to Harriet and Lloyd Aldrich. Early on they moved to Cottage Grove, Oregon where Larry grew up and attended school. He played trumpet in the high school band and later on in the University of Oregon band. Larry graduated from Cottage Grove High School in 1956, and attended the University of Oregon. He met Bev at the U of O bookstore when he was buying textbooks for his classes. During college, Larry worked summers at a U.S. Forest Service lookout station in the Willamette National Forest. He enjoyed that work and shared stories with friends about his experiences there. Bev and Larry married in June of 1959 in Eugene and moved to White Sands, New Mexico where he was stationed in the U.S. Army. He also served at Fort Churchill, the polar bear capital of the world, by the Hudson Bay. Larry worked hard as a sales representative for several food companies, but retirement was the beginning of his favorite pastimes. At the top of his list were his wife Bev, and their three daughters and his six grandchildren. He liked to tell his grandchildren stories of his life (both fiction and nonfiction), and taught them how to golf, fish, and then they'd get milkshakes at the Hillsboro Pharmacy. His grandchildren will always remember their grandpa's pancake and bacon breakfasts. Larry was committed to community service and spent many hours working on events such as the Hillsboro Prayer Breakfast, the Westside Compassion Clinics, many Methodist Church causes, the Kiwanis 4th of July pancake breakfast, the "Putt & Pray" golf tournament fund raiser for the Tuality Hospital chaplain program, and many others. He did home projects too, but didn't get his picture in the newspaper for those. After retirement, Larry rarely missed weekday morning coffee at the Hillsboro Pharmacy with all his buddies. He enjoyed talking with anyone, friends or complete strangers. Larry could often be found on a golf course (he liked them all), especially with friends from the Larry Stafford Golf Club that met on Tuesdays, rain or shine. He and Bev enjoyed driving trips around the U.S. in his treasured Toyota truck, with destinations such as New England, Texas, California, the Southwestern states, and the Lewis & Clark trail to Montana. Larry is survived by his wife of fifty-one years, Bev, their three daughters Lyn; Jennifer & Steve; and Kristi & Chava; and six grandchildren Erin and husband Clarke, Rachel, Kelsey, Casey, Salvador and Manuel; and his great granddaughter Jadyn. A celebration of life will be held on Saturday, November 6 at the Hillsboro United Methodist Church, at 1:00 p.m. Larry passed away at home on October 7, 2010 comforted by family, after a year-long battle with cancer. Please consider donations to the American Cancer Society, or the charity of your choice.

Larry Aldrich A life well lived Larry was born Feb 14th, 1938 in Longview, Washington to Harriet and Lloyd Aldrich. Early on they moved to Cottage Grove, Oregon where Larry grew up and attended school. He played trumpet in the high school band... View Obituary & Service Information

The family of Larry C. Aldrich created this Life Tributes page to make it easy to share your memories.

Send flowers to the Aldrich family.