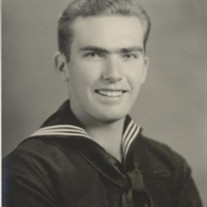 Kenneth Carlton Grant was born June 19, 1921, to Lillie and Fred Grant of Grants Pass Oregon. After graduation from Grants Pass High School, class of 39', he attended Oregon State College until enlisting in the United States Navy at the outbreak of World War II. He served as a fire control technician aboard the destroyer, USS Aulick, (DD569). Kenny met the love of his life, Wanda Keener in San Diego and they married March 6, 1945 in New York City after Kenny completed Officer's Candidate School. He completed Navy service as Lieutenant JG at the conclusion of the war. Kenny began a thirty-three year career with the telephone company as an installer and retired in 1979 as Senior Plant Engineer overseeing operations in three southern California counties. He loved the old Bell Telephone Company and looked forward to working each day with many valued friends. Kenny enjoyed traveling, camping, and especially evenings around the camp fire swapping stories with family and friends. He also loved exploring remote areas with motorcycles and later with dune buggies he had designed and built himself. Kenny had always dreamed of returning to Oregon and after retirement, he and Wanda moved to Hillsboro to be near their daughter's family and to rediscover the Oregon he called home. Kenny passed away April 1, 2013, with family members at his side. He is survived by daughter Susan Turpin (Bob) of Hillsboro, and two sons, Fred Grant (Debi) of Central Point, Oregon, and Alan Grant (Debora) of Jamul, California, eight grandchildren,11 great-grandchildren, and countless devoted friends. He was preceded in death by his loving wife of 67 years, Wanda, November 20, 2012. A memorial service will be held at Cornell Estates Retirement Center in Hillsboro, 10:00 a.m. Saturday, April 6, 2013. A commitment service will be held at 2:00 p.m. at Willamette National Cemetery.

Kenneth Carlton Grant was born June 19, 1921, to Lillie and Fred Grant of Grants Pass Oregon. After graduation from Grants Pass High School, class of 39', he attended Oregon State College until enlisting in the United States Navy at the outbreak... View Obituary & Service Information

The family of Kenneth Carlton Grant created this Life Tributes page to make it easy to share your memories.

Send flowers to the Grant family.