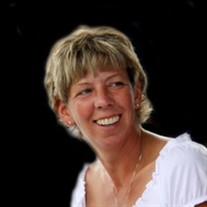 Julieanne Carol (Schwirse) Campbell passed away January 20th, 2014 at St. Vincent Hospital in Portland Oregon. She is survived by her husband Rob, sons Ryan & Kyle, mom Carol Schwirse, her brother Jeff Schwirse, his wife Kelly and their children Tyler, Cole, Caden and Sam, her sister Mindy Barron, her husband Jason and their children Jaycee, Amanda and Brooke, her grandparents Bob & Helen Parente-Jacobs, her in-laws Barbara Campbell, George & Sylvia Campbell, her sister-in-law Kelli McCarty and her daughter Karli as well as several aunts, uncles and cousins and all the many children that came in and out of their house at all hours of the night. She was preceded in death by her dad Greg Schwirse, her grandparents Hal & Peggy Schwirse, Bill & Sue McLaughlin, Papa Joe Parente, and nephew Matthew. Julie was born on March 11, 1969 in Portland Oregon to Greg and Carol Schwirse. She grew up in Hermiston Oregon where she graduated with the class of 1987. As a young girl she loved her camping trips to Oxbow Dam with her grandparents and cousins. She started her long softball career playing little league, always making the all-star team. In high school she added basketball to her list of activities. Her family took up skiing and they spent many weekends up at Anthony Lakes. She was extremely involved in DECA (the trips especially) and many other extra-curricular activities all during high school. She was successful in whatever endeavor she took on, all while holding down at least 2 jobs. In 1989 she received her Associates Degree from Western Business College and began her twenty-four year career with Mitchell, Lang & Smith as a legal assistant. In between card games with her co-workers, she managed to complete every task her bosses Scott and Bruce threw at her. On July 14, 1990 Julie married her love and best friend Rob Campbell. They spent their life together in Hillsboro, Oregon where they raised their two sons. Julie loved every moment she had with her boys and was involved in every activity or sport they played. Along with her husband (because she volunteered him for everything), they worked many hours for the various sports teams they played on. One of her favorite things was keeping score for the baseball games. She was the official scorekeeper for Glencoe Baseball, her dad had taught her well. She even had time to keep her house immaculate, all of the time! Julie was happy wherever she was, but happiest on the beach hunting agates and climbing rocks with her boys. On the rare occasion that the boys were not playing a sport the family loved to travel. They enjoyed the times they had together out adventuring. One of both Rob and Julie's special joy was having their future daughter-in-law, Lindsay, in their lives. A Celebration of Life will be held on January 25, 2014, 12:00 pm at Calvary Chapel Worship Center, 6550 SE Alexander Street Hillsboro, OR 97123. If you wish to honor Julie in any way, please support your local sports programs.

The family of Julieanne Carol Campbell created this Life Tributes page to make it easy to share your memories.

Send flowers to the Campbell family.