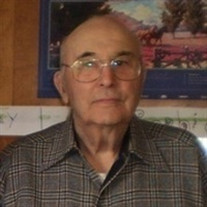 J. Wesley Gates John Wesley Gates, 87, known as Wes to friends and family, passed away February 24, 2014 at his home just northwest of Hillsboro. He was born in Portland on November 10, 1926, the son of John W. and Ruth Meek Gates. The family moved back to the farm in Hillsboro in 1930 after spending their first few years in the St. Johns area. Wes grew up on the farm. He attended Leisyville School and graduated from Hillsboro High School, class of 1944. His earlier hobbies included model airplane building. He crafted both wire control and remote control models. Wes enlisted in the U.S. Army in Feb. 1945, although he would much rather have been a pilot. He was shipped to Luzon in the Philippine Islands and was later stationed at Fort Ord, California where he taught boys from Brooklyn to drive Jeeps and also drove for officers. Wes was discharged in Dec. 1946. Wes did learn to fly from his Uncle Jim Meek and even soloed. He studied auto mechanics, and worked in Portland for a few years before returning to Hillsboro to be in partnership with his father on the family farm, now a Century Farm. Wes and his Dad milked a few cows, raised hay, filberts, many varieties of grain, corn, peas for Birds Eye, clover and grass seed crops. He married Constance Jo Connell March 27, 1954 in the Hillsboro United Methodist Church. They lived in the Leisyville area, and built a house on the family farm in 1972. He also farmed with his father-in-law Arthur Connell near North Plains for many years. Connie and Wes have three children, Annette Gates of Sunriver, Oregon, Rebecca Ferguson (Guy Martin Ferguson) of Hillsboro, and Spencer C. Gates (Pam Gates) of Hillsboro. Their four grandchildren are Duncan Gates, Allison Gates, Emma Ferguson and Sophie Ferguson, all of Hillsboro. Wes is also survived by his sister, Judith E. Goldmann (Almon) of Hillsboro. Always interested in cars and mechanics, he owned and worked on a '23 Model T Ford and a '47 Ford Pickup. Wes was a 45 year member of the Rose City Model T Club and also belonged to Farm Bureau, the Washington County Historical Society and 4-H Corn Club. Wes loved working on cars and tractors, going to swap meets, Model T Field Meets, listening to radio broadcaster Paul Harvey, Dixieland Jazz, Pawn Stars and Pickers. He also loved to read and especially enjoyed to sit and enjoy the heat of his wood stove. Services will be held at Donelson Funeral Chapel with interment in the Fir Lawn Memorial Park. Donations in his memory can be made to The American Heart Association, Bonnie Hayes Small Animal Shelter or to a charity of your choice.

J. Wesley Gates John Wesley Gates, 87, known as Wes to friends and family, passed away February 24, 2014 at his home just northwest of Hillsboro. He was born in Portland on November 10, 1926, the son of John W. and Ruth Meek Gates. The family... View Obituary & Service Information

The family of John Wesley Gates created this Life Tributes page to make it easy to share your memories.

Send flowers to the Gates family.