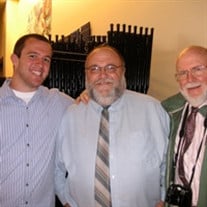 John Andrew (Andy) Loeb Feb. 14th, 1961-Mar. 9th, 2013 John Andrew (Andy) Loeb was born on February 14th, 1961 in Philadelphia, Pennsylvania. In 1969, Andy moved to Missoula, Montana near Bonner and in 1973, he moved again to Helena, Montana. The family moved to Beaverton, Oregon in 1975 and he began attending Beaverton High School. During his senior season, his varsity soccer team won the state championship! He graduated from Beaverton High School in 1978 and then attended Oregon State University. During college, Andy was a member of the Delta Chi Fraternity and lettered on the university's bowling team. Andy graduated with a Bachelor's degree in Business Administration in 1983. He worked as a store manager with Print Right/LazerQuick from 1984-1989. Andy married his best friend, Pam Swanda in October of 1985. Andy started his own printing company named the Printing Edge in Hillsboro, Oregon in 1989. As the kids grew older, Andy began coaching soccer. He coached soccer for 15 years for the Hillsboro Soccer Club both recreationally and competitively. He also served on the Hillsboro Soccer Club's board of directors. After over 10 years in the printing business he sold his store in 1999. A change of career would allow him to pursue his passion - teaching. In 2000, Andy attended Pacific University's Masters in Teaching program focused on elementary education. He began substitute teaching in the Hillsboro School District in 2001. In 2002, he was hired to teach a 3rd/4th grade blend at Witch Hazel Elementary. Andy worked for 9 years at Witch Hazel and in 2011, moved to Indian Hills Elementary for the 2011-2012 school year. Andy was diagnosed with colon cancer in May of 2012. Throughout chemotherapy treatment, Andy kept a positive outlook and continued cultivating relationships with others. His goal was to live and enjoy life; he wanted to "dance". On the morning of Saturday, March 9th, 2013, Andy passed away. His strenuous fight with cancer was too much for his heart. Andy is survived by his wife, Pamela SwandaLoeb; his sons Joseph (Renee Potts), Gavin (Stephanie Jensen); and daughter, Allison (Krispin Jewkes). Also survived by his father, John Fatula (Philadelphia, PA); his dad, Dr. Louis Loeb (North Plains, OR); his brother David Fatula (Carlsbad, CA); his sisters Debby Parker (LaPine, OR), Jennifer Cedarwall (Stockholm, Sweden), Julie Rosqvist-Gerard (Hillsboro, OR), and Emily Waldman (Bethesda, MD); and numerous aunts, uncles, cousins, nieces and nephews. He was proceeded in death by his mother, Dr. Barbara Keely Loeb. A celebration of his life will be held on Saturday, March 23rd at 1:00 p.m. in Hillsboro High School's theatre. In true "Andy" style, we will be collecting Box Tops for Education for Witch Hazel and Indian Hills Elementary, as well as donations of books to their libraries in Andy's name. In lieu of flowers, the family suggests contributions to the Loeb Memorial Scholarship Fund at any Wells Fargo Bank.

The family of John Andrew "Andy" Loeb created this Life Tributes page to make it easy to share your memories.