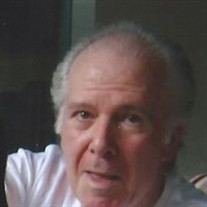 Joel Swanno Born on April 26, 1936, in Brooklyn, New York to John and Honora Swanno. Joel passed away on October 31, 2016 as a result from his twelve-year battle with Parkinson's. He is survived by his beloved wife, Virginia Smith Swanno, and two children, daughter, Susan Swanno, 54, and son, Paul Swanno, 52, as well as, a son-in-law, Stan Randle and daughter-in-law, Kelley Swanno. He is also survived by three grandchildren, Logan LeCompte, 26, Jacob Swanno, 13, and Mya Swanno, 12 and brother, Jimmy Swanno. He was preceded in death by his parents, brother John Swanno, sister, Joan Brown, and granddaughter, Chloe. Joel completed high school at the prestigious Stuyvesant High School in New York City. He then attended King's Point Merchant Marines Academy at King's Point, New York and earned a Mechanical Engineering Degree. He relocated to Roseville, California and worked for AeroJet General designing rocket engines and joined the Navy Reserve. He met his wife, Virginia on Halloween and were married a year and half later on July 1, 1961 in Sacramento, California. He missed the east coast and relocated to Hartford, Connecticutt for 13 months. The family relocated to Aloha, Oregon where he raised his family and worked for Textronix and Intel as a mechanical engineer until retirement. Joel enjoyed spending time with his family, watching his children's sporting events, traveling, camping, and watching ice hockey. Joel loved being at sea on freighter ships and went on several adventures with Virginia. Joel was a devoted father and grandfather. He spent as much time as he could with his grandchildren, even living in Denver for two years. He was a loving husband and was married to the love of his life for 55 years. He met his wife 57 years ago on Halloween and left her side on Halloween.

Joel Swanno Born on April 26, 1936, in Brooklyn, New York to John and Honora Swanno. Joel passed away on October 31, 2016 as a result from his twelve-year battle with Parkinson's. He is survived by his beloved wife, Virginia Smith Swanno, and... View Obituary & Service Information

The family of Joel E. Swanno created this Life Tributes page to make it easy to share your memories.

Send flowers to the Swanno family.