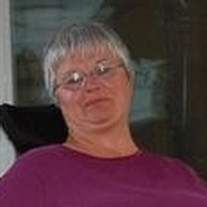 Iva May Kingsbury, 59, a resident of the Hillsboro community died January 1, 2012 at St. Vincent Medical Center following a courageous battle with Muscular Dystrophy. A Celebration Of Life Service will be held Saturday, January 7, 2012 at 10:00 AM at Donelson~Fir Lawn Memorial Center, 1070 West Main Street, Hillsboro. Private Cremation Rites have been held and Inurnment will be held at Fir Lawn Memorial Park at a later date. Iva May Kingsbury was born January 5, 1952 in Hillsboro, Oregon to the late Neal S. and Almyra Jean (Kent) Hammond. She was raised and educated here having graduated from Hillsboro High School in 1970. Following her education Iva was united in marriage to Kenneth V. Kingsbury on February 26, 1972 in Hillsboro. Together, they raised two children and were later divorced. Iva began working for the Farmers Insurance Company in 1971. She advanced in her career with the company to serve as a underwriting analyst. She retired early in 2000 due to the health challenges she was facing with Muscular Dystrophy. Among her personal interests, were stamping, computer games, visiting friends, and playing with her grandchildren. She enjoyed working on her stamping projects and made many cards and decorated letters that she gave to family and friends. Iva loved to play games on the computer and she had lots of visitors. She loved to visit with her grandchildren, playing games, watching movies and just having fun. She always found the strength and courage to get out to see the grandchildren participate in school and sports activities. They fondly referred to Iva as "Grama Punkin". Survivors include her son and daughter in law, Matthew and Carrie Kingsbury of Hillsboro; daughter and son in law, Lori Ann and Jeff Richardson of Tacoma, Washington; brother and sister in law, John and Jean Hammond of Banks, Oregon; and sister and brother in law; Donna L. and Skip Skipper of Hillsboro. Also surviving are seven grandchildren: Abby, Katie, Maddy, and Grant Richardson; and Natalie, James, and Caden Kingsbury, as well as another grandchild on the way. The family suggests that remembrances may be contributions made to the Muscular Dystrophy Association, 4800 SW Macadam Avenue, # 205, Portland, Oregon 97005, in Iva's Memory. Services entrusted to Donelson~ Fir Lawn Memorial Center, Hillsboro

Iva May Kingsbury, 59, a resident of the Hillsboro community died January 1, 2012 at St. Vincent Medical Center following a courageous battle with Muscular Dystrophy. A Celebration Of Life Service will be held Saturday, January 7, 2012 at 10:00... View Obituary & Service Information

The family of Iva May Kingsbury created this Life Tributes page to make it easy to share your memories.

Iva May Kingsbury, 59, a resident of the Hillsboro community...

Send flowers to the Kingsbury family.