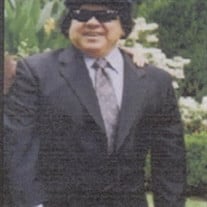 Homero de la Garza was born in Kenedy, TX on April 2, 1950, and he passed away on December 12, 2013 in Reno, NV. He had moved a year ago to Reno from Beaverton, OR. After 25 plus years of working at the U.S. Postal Service in Portland, he retired in 2012. He had graduated from Washington High School in Portland, OR. Homero is survived by one brother, Dr. Jess de la Garza and sister-in-law, Marcy Rabb de la Garza, from Tucson, AZ, and four sisters: Elsie Gonzales from Hillsboro, OR; Irma de la Garza and brother-in-law, Jose Castillo, from Aloha, OR; and one unnamed sister; and Sandra Ghaffari from Phoenix, AZ; and sister-in-law, Marsha de la Garza, from Portland, OR. He is also survived by seven nieces and six nephews, and several grand nieces and nephews. He was preceded in death by his parents: Jess and Dionicia de la Garza; a brother, Gilberto de la Garza, and a nephew, Andy de la Garza Garcia. Homero's passion was golfing and traveling. He traveled extensively to domestic and international sites. He also attended several golf tournaments through the years. In response for a family memory book input, he recently provided us with the following: "I was going along fine with my love affair with golf for more than 35 years. Then the change of lifeImplant a metal hip. Now I have arthritis in my left knee. I will probably die from being bored and fat. I still love golf from my La-Z-Boy!" He was full of life and he had the biggest heart. He loved and cared very much about his immediate family, nieces, nephews, and in-laws. He would always do his best to stay in touch and find out how everyone was doing. It was very important to him. He would help anyone (not just family) who needed a helping hand. We will sorely miss him, and he will always be in our hearts. Rest in peace our Dearest Brother. A private memorial service will be held by the family in Oregon. Arrangements will be managed by Donelson Funeral Chapel in Hillsboro at http://www.firlawnfh.com/.

Homero de la Garza was born in Kenedy, TX on April 2, 1950, and he passed away on December 12, 2013 in Reno, NV. He had moved a year ago to Reno from Beaverton, OR. After 25 plus years of working at the U.S. Postal Service in Portland, he retired... View Obituary & Service Information

The family of Homero de la Garza created this Life Tributes page to make it easy to share your memories.