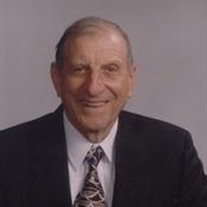 Henry Cristough Beglinger, born Feb 1, 1919 on the family farm in Hillsboro. Henry was told that 1919 was such a cold winter that they had to keep him near the cook stove to keep him warm. Actually Henry's quote was "the family put him in the oven to keep warm". Mother Anna, father Cosmus. Third of three children. Margaret, Louie then Henry. Married on May 28th, 1947 to Phyllis "Doreen" Tyrrell in Portland. Doreen was a beautician from Slayton MN. Since Doreen's two sisters had already moved to Portland during the war years, her father called her up one day at her job in Fairbolt MN and said "pack your bags, you are moving to Oregon". Her father called Oregon "God's country". Two sons Gary and Joe. Preceded in death by wife Doreen, son Joe, sister Margaret, brother Louie. Henry's flat feet disqualified him from serving in WWII, so he and his older brother Louie formed a partnership (Beglinger Brothers) for custom farming to pay the mortgage and support the war effort going on the home front. In 1955 Henry started H. C. Beglinger excavating with a bulldozer and dragline. In 1967 Henry, Doreen, Gary, & Joe started planting the filbert orchard on Burkhalter road. Henry was a founding member of Antique Powerland, Brooks, OR. Henry and Doreen enjoyed traveling to Palm Springs, Los Molinas, Yuma, Branson, Alaska, Oklahoma, Minnesota, Iowa and especially visiting with the Amish in Ohio. Locally there was always the monthly Swiss potluck and annual picnic. 1999 Henry finally traveled to his father's homeland of Switzerland also Austria and Germany. A devoted "polka Joe" fan, most recently traveled to Polka Joe festivals in Minnesota, Branson and Texas. Until he got sick, he went dancing weekly at the Salem/Kaiser senior center and the Elsie Stuhr (Beaverton) senior center. Henry and his wife Doreen got the names of "Grandpa and Grandma Donut" from his great grand son Casey, because every time he saw him they were bringing him donuts. Henry's favorite book: "Only Count the Sunny Hours" depicting the brothel diaries of Madame Isabelle in Kemmerer Wyoming from 1890 to 1926. The diaries were discovered by Wyoming State Legislator Ray Essman who grew up in Kemmerer. Survivors include son and daughter-in-law, Gary and Sharon Beglinger, Hillsboro; granddaughters Holly Beglinger, Portland; Jill Reeg, Portland; Cheryl Hubert, Wilwaukie; and great-grandsons Casey Hubert and Carson Reeg; and numerous nieces and nephews. A funeral services will be held June 24, 2011 at 11:00 A.M. in our chapel. Interment will take place at Valley Memorial Park in Hillsboro, OR.

Henry Cristough Beglinger, born Feb 1, 1919 on the family farm in Hillsboro. Henry was told that 1919 was such a cold winter that they had to keep him near the cook stove to keep him warm. Actually Henry's quote was "the family put him in the... View Obituary & Service Information

The family of Henry Cristough Beglinger created this Life Tributes page to make it easy to share your memories.

Send flowers to the Beglinger family.