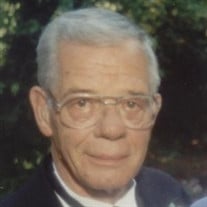 "Gerry" was born on Mar. 15, 1935 in Fergus Falls, Minn. to Harold and Ruby Nagel. He passed in Portland, Ore. on Nov. 21, 2013 after extended kidney, heart and vascular illnesses. Gerry grew up in Fergus Falls and Battle Lake, Minn. He graduated from Fergus Falls High in 1953 with honors of Representative Senior, National Athletic Honor Society and National Honor Society. He lettered in football, basketball and baseball, sang in the choir and was a class officer. After graduating, he joined his parents in Concrete, Wash. and landed a job in Everett with West Coast Tel. Co., later known as G.T.E., currently Verizon. He worked equipment installation throughout Wash., Ore. and Calif. He met Doris Thompson while on vacation back in Fergus Falls, persuading her to come west, where they were married in Everett, Wash. on Nov. 21, 1956. Eventually, he worked equipment maintenance in the Hillsboro area. An avid union man, Gerry became President of IBEW Local 89. Eventually, he took the job of Union Representative for Local 89, travelling the Pacific Northwest. In Retirement, Gerry and Doris found pleasure in returning home to Minnesota in their motor home, where Gerry enjoyed as much fishing as he could. He also enjoyed hunting and all sports, especially football. He was a member of the Elks. He treasured his dog, Ginger, and loved all animals. He was a member of Calvary Lutheran Church and served on the council and as treasurer and was a dedicated usher. On Gerry and Doris's 57th wedding anniversary, after surviving two consecutive, complex vascular surgeries, Gerry passed peacefully during his recovery with his family by his side. Gerry is survived by his loving wife, Doris Thompson Nagel; daughter, Gail Nagel-Erickson, Psy.D.; daughter and son-in-law, Lori and Donald Scott; grandchildren, Michael and Lauren Scott; and great-grandson, Brody. Gerry was preceded in death by his parents, Harold and Ruby Nagel; and his son-in-law, Keith Erickson. A viewing will be held on Saturday, Dec. 7, 2013 at 10 a.m. with a service following at 11 a.m. at Calvary Lutheran Church, 937 NE Jackson School Rd. in Hillsboro; a luncheon reception will follow. Memorial contributions may be made to Canine Companions for Independence, to the American Heart Association, or a charity of your choice.

"Gerry" was born on Mar. 15, 1935 in Fergus Falls, Minn. to Harold and Ruby Nagel. He passed in Portland, Ore. on Nov. 21, 2013 after extended kidney, heart and vascular illnesses. Gerry grew up in Fergus Falls and Battle Lake, Minn. He graduated... View Obituary & Service Information

The family of Gerald "Gerry" Nagel created this Life Tributes page to make it easy to share your memories.

Send flowers to the Nagel family.