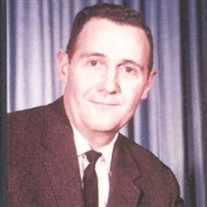 George Edward Cobern Jr. was born Sept. 17, 1923, in St. Albans, W. Va., and died Sept. 25, 2014, in Hillsboro. He is survived by his wife, Jacqueline Cobern; children, Carolyn Cobern, Kathy Schneider, Jim, Bob and Don Cobern; 10 grandchildren; and 10 great-grandchildren.After serving in the U.S. Navy, toward the end of WWII, George decided to pursue a career in optometry. He attended Pacific University where he met Jackie. They were married in 1948, and George got his doctorate degree in optometry from Pacific University in 1949. He practiced optometry in Kennewick, Wash., where he was an active member of the community and raised his family for over 30 years. Upon retiring, George and Jackie decided to spend their retirement years in Hillsboro, Jackie's hometown. While they were able, George and Jackie were active members of the Hillsboro Nazarene Church. George was also an active member of the McDonald's old guys' coffee club, where he daily enjoyed his cup of coffee, chocolate chip cookies and lively conversation with the fellas for many years. A service will be held for George at 1 p.m. Saturday, Oct. 11, 2014, at the Donelson Funeral Chapel, 1070 W. Main St., in Hillsboro. Anyone who knew George, and would like to attend, is welcome.

The family of George Cobern created this Life Tributes page to make it easy to share your memories.

Send flowers to the Cobern family.