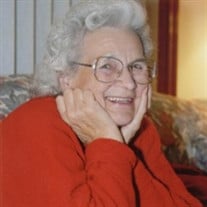 Dorothy May (Karns) LeGall passed away quietly on June 25, 2014 in Beaverton, Oregon at the age of 93. Dorothy is the fifth child of Vernon Dale Karns and Charlotte Orpha (Jones) Karns. She was born on 3 November 1920 in Sheridan,Colorado. She was proceeded in death by her husband and love of her life, Eugene Jerome LeGall and a daughter, Dorothy Jeanne LeGall. Surviving family members are a son, Raymond Victor LeGall of Vancouver, Washington and daughter, Judith Clare (LeGall) Morse and son-in-law Mike Morse of Beaverton, Oregon. She has 8 grandchildren, David and Debbie (Kirk) Morse, Christina (Morse) and Curtis Garrett, Daniel and Jenna (Isaacs) Morse, Samuel and Brandi (Pellegrin) Morse, and Steven and Devon (Morris) Morse, Jennifer (LeGall) and Thad Eakins, Rebecca (LeGall) and Ian Royce, Scott LeGall. Dorothy's great grandchildren are: Sierra (Morse) and Blaze Jeppesen; Elder Broderick Morse serving a mission for the LDS Church in Australia; Rogan Morse, Hunter Morse, Amberli Morse, Audri Morse, Triston Morse, Dmitri Morse, Tyler Zielinski, Jackson Ray, Cole Garrett, Tayler Morse, Daemon Morse, Karlie Morse, Piper Morse, McKenzie Morse, Ashley Morse, Madelyn Morse, Jalen Morris, Chelssea (Eakins) and Tim Eyler, Elder Kyle Eakins serving a mission for the LDS Church in New Mexico, Sarah Eakins, Hannah Eakins, Emily Eakins, JayLynn Royce and Penelope Royce. Dorothy also has one Great/ great grandson, Riot Paul Jeppesen. Dorothy lived for many years in North Portland and moved to Hillsboro in 1963 to a home that Gene built. She felt that after being the best wife possible to Gene, her next greatest job was to be a Grandmother. Dorothy spent her life serving others, whether it be her family or her friends and neighbors. Her home was always the place that her grandchildren loved to be. The cookie jar was always filled with Grandma's famous chocolate chip cookies. Everyone tried to stop by Grandma's on Halloween so they could feast on her special donuts. No one wanted to miss the New Year's Eve party with so many treats. Everyone tried so hard to stay awake until midnight. Then, of course, there was breakfast with those special pancakes. In fact, everything that Grandma cooked was yummy good. Just before her husband Gene retired, they purchased a small cabin at Rockaway Beach, Oregon where they would spend a lot of their time in the summer. All of the grandchildren cherished the time they were able to spend with their grandparents at the beach - playing in the ocean, searching for hidden treasures in the surf, running up the sand hill at Bar View or just walking on the beach. Grandma made every day special. In addition to being a wonderful cook, Dorothy loved gardening and sewing - especially quilting. She worked hard to have a special baby quilt ready for each new grandchild as well as making quilts for her grandchildren as they got older. These are cherished mementos reminding each one how much their Grandma loved them. Grandma always loved having her family near. The past 10 years have been spent at Clare Bridge of Beaverton, a memory care facility. We are grateful for the kindness and love shared by her caregivers.

Dorothy May (Karns) LeGall passed away quietly on June 25, 2014 in Beaverton, Oregon at the age of 93. Dorothy is the fifth child of Vernon Dale Karns and Charlotte Orpha (Jones) Karns. She was born on 3 November 1920 in Sheridan,Colorado.... View Obituary & Service Information

The family of Dorothy LeGall created this Life Tributes page to make it easy to share your memories.

Send flowers to the LeGall family.