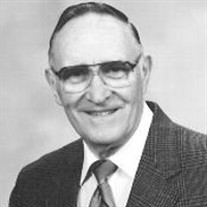 David Radmacher Nov. 23, 1923 - Feb. 26, 2011 David was born on November 23, 1923 in Scholls, Oregon and passed into the loving arms of his Savior on February 26, 2011 at the age of 87. His is survived by his two daughters and son-in-laws, Susan Jane and William Coussens of Hillsboro, Oregon and Julie and Chuck Mosiman of Lacey, Washington. He had four grandchildren Brandon McDowall, Abby Jensen, Mandy Meier and Mallery Brown and nine great-grandchildren. He is survived by his sister Marie Portin of Portland and Dr. Earl Radmacher of Milwaukie. David is preceded in death by his wife Nancy in 2008 who was the love of his life. His oldest daughter Merry Dee passed in 1992. Brothers Karl, Ewald, Robert and sister Adele have already passed. David was a sergeant in the Army Air Corp during WWII where he was awarded with several medals. He took part in the invasion of Normandy and repaired downed aircraft in France and Germany for three years until the end of the war. After the war, David became a successful builder/developer and realtor/broker. He created Waco, Inc. and later David Radmacher Realty. David was a long time member of the Hillsboro First Baptist Church. He was a leader, Trustee and Deacon during his years at the church. He managed the remodeling and building additions to the church. David was also a member of Rotary and the Chamber of Commerce of Hillsboro. More than anything, David was a kind, generous, loving, faithful and Godly man his entire life. He lived his life "one day at a time", trusting in the Lord for guidance daily. After retirement, David enjoyed camping with his wife Nancy, family and friends. He enjoyed traveling and being a grandparent. He devoted himself to his family and continued to help in the church in anyway possible. We will miss you dad but we take comfort in knowing you are with your Lord and Savior. Matt. 6:33 Services will be held at Donelson Fir Lawn Memorial Center in Hillsboro on Saturday, March 5th at 1:30 p.m. In memory of David, donations may be made to Alzheimer?s Disease Research Association.

The family of David Radmacher created this Life Tributes page to make it easy to share your memories.

Send flowers to the Radmacher family.