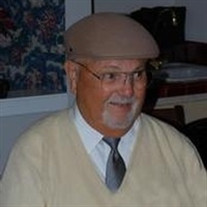 May 4, 2011, Dale Albert Busch lost his 13-year battle with prostate cancer. It was a battle he fought valiantly, with immeasurable courage and determination. Born January 27, 1926 to Albert and Grace Busch, Dale grew up in Hillsboro during The Great Depression, learning early the value of hard work, sacrifice, and community service. He attended Hillsboro High School before enlisting in the Army Air Corp at the end of WWII as he came from a family of servicemen; including his father who fought on the fields of France in WWI and his older brother, Keith Busch who ultimately lost his life training B-17 Bomber Pilots. Dale didn't see action in WWII but returned home to attend school @ Oregon State College, graduating as part of the school's first Air Force ROTC program and obtaining a BA in Education. He was also a member of the Sigma Chi Fraternity. Dale eventually saw military action overseas in the Korean War, flying 100 successful missions for the Air Force in his trusted F-80 Fighter aircraft, "The Flying Dutchman". Following Korea he continued to serve ferrying aircraft all over the worldand in the process met his future wife, Lois, literally on a runway in Cheyenne, Wyoming while she was a stewardess for United Airlines. After a whirlwind courtship they married on January 30, 1954, in Chicago, Illinois. When Dale married he was stationed @ Dover Air Force Base in Dover, Delaware and soon after marrying Lois he retired from the Air Force and returned to Hillsboro in 1955 to raise a family and work as an Independent Insurance Agent as the owner of his own insurance business. Before retiring from the insurance business he was an active member of the community of Hillsboro in The Rotary Club, The Masons, The American Legion, and serving the county as a Washington County Planning Commissioner just to name a few of his many commitments. His legacy of commitment to family, community, and country is currently carried on today by his surviving children. Dale's love affair with Hawaii had him vacationing there regularly with Lois and family. He enjoyed supporting the numerous past and present activities of his 2 children and 3 grandchildren. In addition to his lifelong passion for aviation he also loved boating, drumming, playing the accordion, cheering for his Beavers, rooting for the Green Bay Packers, and regaling his family with historical stories related to early life in Hillsboro & wartime experiences. He will always be remembered for his warmth, patriotism, and devotion to his family. Dale is survived by his wife Lois of 57 years; children Nenice Busch Andrews and Michael Busch; Son-In-Law David A. Andrews MD; grandchildren Megan & Keith Andrews and Brock Busch. A service will be held at Willamette National Cemetery, Friday, May 27th from 12:30 to 1pm and immediately followed by a celebration of his life at The Rheinlander restaurant in Portland, OR @ approximately 1:45 pm. Donations can be made to The Dale Busch Memorial Scholarship Fund (for graduating high school seniors pursuing a career in aviation), c/o Hillsboro Schools Foundation. Online donations possible through www.hsfonline.org by clicking "Donate".

May 4, 2011, Dale Albert Busch lost his 13-year battle with prostate cancer. It was a battle he fought valiantly, with immeasurable courage and determination. Born January 27, 1926 to Albert and Grace Busch, Dale grew up in Hillsboro during... View Obituary & Service Information

The family of Dale Albert Busch created this Life Tributes page to make it easy to share your memories.

Send flowers to the Busch family.