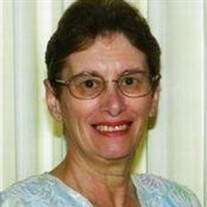 Barbara Anne St. Onge Collins, 66, a longtime resident of the Forest Grove community died early Thursday morning, April 14, 2011 at her home at Jennings McCall II after a courageous battle with Lou Gerigs Disease. A Celebration of Life Service will be held Saturday, May 14, 2011 @ 3:00 PM at the Mt. Jefferson Room, Jennings McCall, 2300 Masonic Way, Forest Grove, Oregon, with Rebecca Hamshar officiating. The Storyteller Grand Family will conduct the OES Funeral Rites. Private Cremation Rites have been held and a Private Inurnment will be held at Fir Lawn Memorial Park, 1070 West Main Street, Hillsboro, Oregon in the Haven Of Rest Columbarium at the top of the hill. Barbara Anne (Scooter to many of her friends) Collins was born January 28, 1945 in New Bedford, Massacheusets to Leopold Aldor and Felismina (Gil) St. Onge. In July 1957 the family moved to Fremont, California where Barbara graduated from Washington Union High School in 1962. Following her education she worked as a dental assistant in a childrens dental clinic. She was married to Gary Watkins on March 6, 1964. They had two sons, William and Robert. They were later divorced and Gary preceded her in death last year. Over the years Barbara worked in several places. Barbara moved to Oregon in February 1972. She loved photography and was able to photograph pictures of the early onset of the Mt. St. Helens eruption on May 18, 1980. She was the first woman to fly inside the crater to take pictures on June 19, 1980. Surviors include her two sons and daughters in law; William D. Watkins and wife Stephanie of Hillsboro, Oregon, Robert C. and Michelle Watkins of Colorado. Also surviving are two grandchildren; Jessica Ann and Kristpher Watkins, a brother and sister in law; Robert L. and Phyllis St. Onge. Among her personal interests she always enjoyed collecting sheets of postage stamps. She was also involved with the Girl Scout Organization, Order of Eastern Star, having joined Beaver Chapter #106, Beaverton, Oregon on April 26, 1994, serving as Worthy Matron for three years, and Worthy Matron at Home Star Chapter #187 twice. Barbara was Housing Chairman, Yearbook Chairman for 7 years, Chairman of the OES Journal, FAITH Special Activities, Co Chair of the FAITH Birthdays, a Grand Representative of Wisconsin 2003-2005 and traveled to Grand Chapter in Osh Kosh Wisconsin in 2005. Barbara served as Grand Adah, 2010-2011 with the Storytellers. She served as Royal Matron twice in Acacia Court #22 in Hillsboro, and Grand Wisdom for the 2008-2009 in Order of Amaranth, White Shrine of Jerusalem #1 in Portland, Oregon and Ladies Oriental Shrine of North America, Al Zahrah Court #58 in Portland, Oregon. Her achievements include California State 500 Bowling Champion 1971, Grand Wisdom for Amaranth and Grand Ada for Eastern Star. Barbara was not perfect and was always willing to say so. She was always very busy and a good friend too many of us over the years. At the end of her emails was her motto for life, "Be the kind of woman that when your feet hit the floor each morning the devil shudders and says, "Oh No, she's up!" She was loved by many and will be greatly missed. Services have been entrusted to Donelson~Fir Lawn Memorial Center. Please check back for video tribute and please leave a message to the family.

The family of Barbara Anne Collins created this Life Tributes page to make it easy to share your memories.

Barbara Anne St. Onge Collins, 66, a longtime resident of the...

Send flowers to the Collins family.