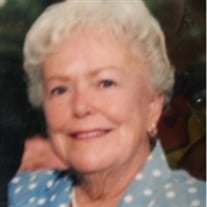 Barbara June Arries was born April 9, 1920 to Bill and Maggie Wiedemann in San Francisco, California. The end of her life journey came on July 12, 2014, in her home in Aloha surround by her loved ones. She was 94 years old.She was given the nickname "June bug" by her father, which stuck, but everyone else knew her simply as June. June attended Poly Technic HS, and after graduation in 1938 joined her family in Los Angeles where she met her rst husband, Patrick H. Mc Cormack. Together they created a happy family of eight,including six wonderful children and two loving parents. After the untimely passing of Patrick in the summer of 1962, June soon married the second love of her life, Donald Bullock Arries. With this union Donald added 4 more children from a previous marriage bringing the family size to a lively brood of 10. * June had a wonderful knack and talent for interior decorating; the family home was always in the process of creative updates and remodeling. She also had a are for fashion. It wasn't unusual for her to have four pairs of the same shoe, each in different colors. She was always ready for the many social gatherings she enjoyed with her friends and family.June was blessed with an endearing charm and wit that won her many friends. She loved to be in the center of it all and lived a life with both of her husbands and family that allowed for numerous fun- lled gatherings"she was always the rst to arrive and the last to leave. At the age of 13, her father, Bill, introduced June to his love of the game of golf. It was soon apparent that she, too, came to love the sport and displayed an innate talent for the game; a sport she played continuously until the age of 87. At one time she held a handicap of three"a score that allowed her to hold her own, even with the pros. This love and talent of the sport won her many club championships and the winning success of many Invitationals throughout the region. She had the fortune to play on some of the best courses throughout the country, as she traveled well into retirement, culminating at the sport's "Holy Grail": St Andrews, Scotland. She was proceeded in death by her husbands, Patrick and Donald, her rst and second born, Patrick Michael McCormack and Barbara Dianne Card as well her step-son, Douglas Frank Arries. She is survived by her daughters, Judith Anne Pierce, Jean Winslow Arries Broome, Kathleen Mary De Beaudry, Colleen Patricia (Leslie) McCormack, and her sons, Donald Keith (Theresa) Arries, Scott Melville (Robin) Arries, James Kevin (Cyndee) McCormack. Her 27 grandchildren, 27 great-grandchildren and 4 great-great grandchildren, as well as her loving sister, Betty Jean Turner and her devoted niece and nephew, Sandra Dianne Long and Stephen E. Turner. A celebration of June's life will be held at Golden Valley Brewery, 1520 NW Bethany, Beaverton on Saturday, July 19th at 4pm. Any remembrances please send in the form of donations to Providence Hospice at: 6410 NE Halsey #300 97213, attention: Hospice

Barbara June Arries was born April 9, 1920 to Bill and Maggie Wiedemann in San Francisco, California. The end of her life journey came on July 12, 2014, in her home in Aloha surround by her loved ones. She was 94 years old.She was given the... View Obituary & Service Information

The family of Barbara June Arries created this Life Tributes page to make it easy to share your memories.

Send flowers to the Arries family.